In Memory of Jacob Friedman

"I swore never to be silent whenever and wherever human beings endure suffering and humiliation. We must always take sides. Neutrality helps the oppressor, never the victim. Silence encourages the tormentor, never the tormented." - Elie Wiesel

This year we received 1032 entries from 75 different schools!  Thank you to everyone who participated and who helped to make this our biggest contest yet!

Students were asked to respond to the quote above.  Winners were selected by a panel of judges - artists, teachers, and community members. The contest is open to 5th-12th grade students in the states of Washington, Oregon, Idaho, and Alaska. See complete list of Contest Guidelines.
2019 Writing, Art and Film Contest theme will be announced in the winter. 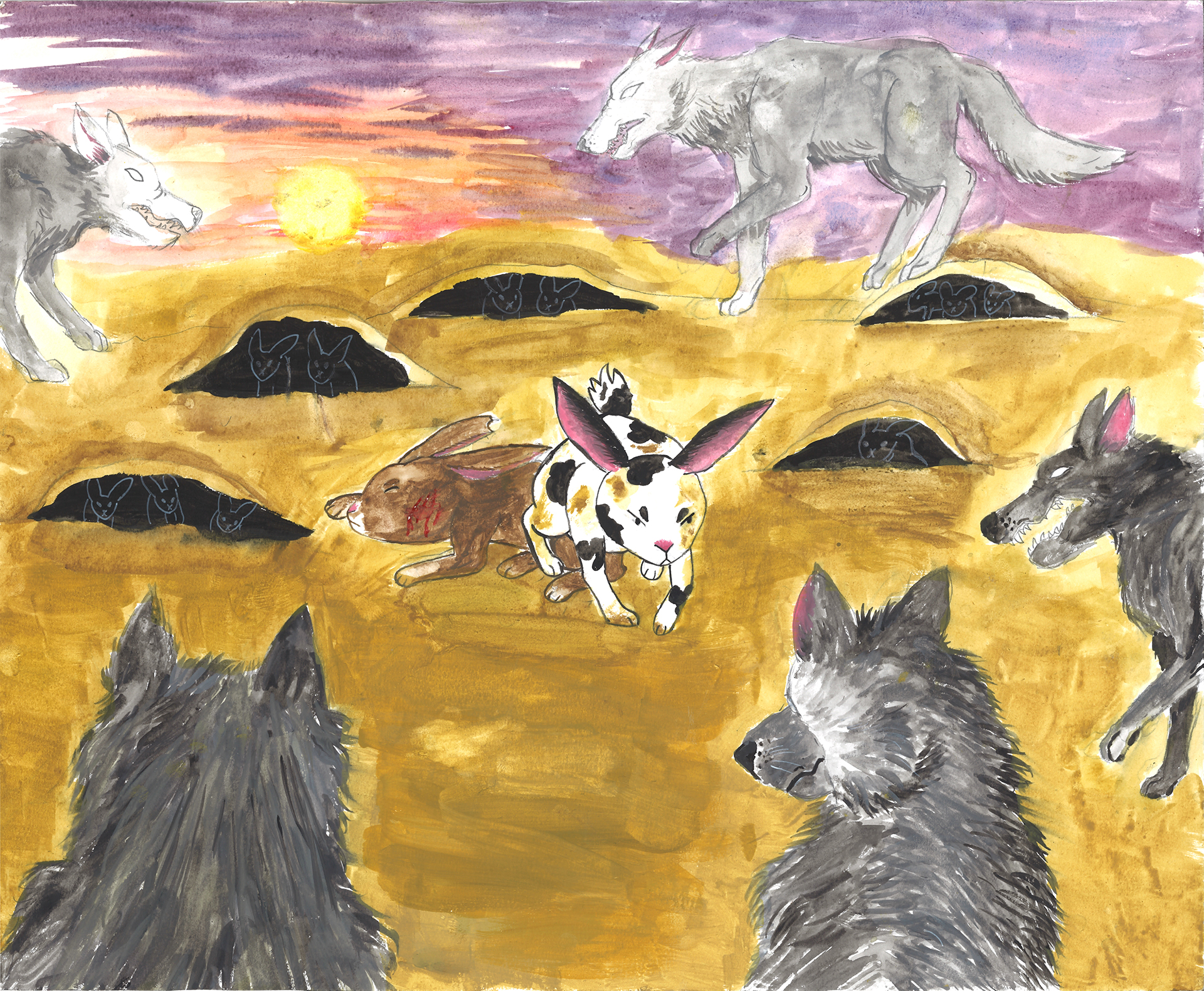 This piece describes how most of society picks on anyone who is different. The wolves represent the hateful parts of society, which try to attack the rabbit who looks different because of its chipped ear. There’s only one rabbit protecting the injured one, representing how very few people stand up for the frequently hated parts of society. The rabbits represent the bystanders of our community and how they just watch without saying a thing. The piece teaches how more people need to stand up for these hated communities, like the LGBT+ community, different religions, etc. 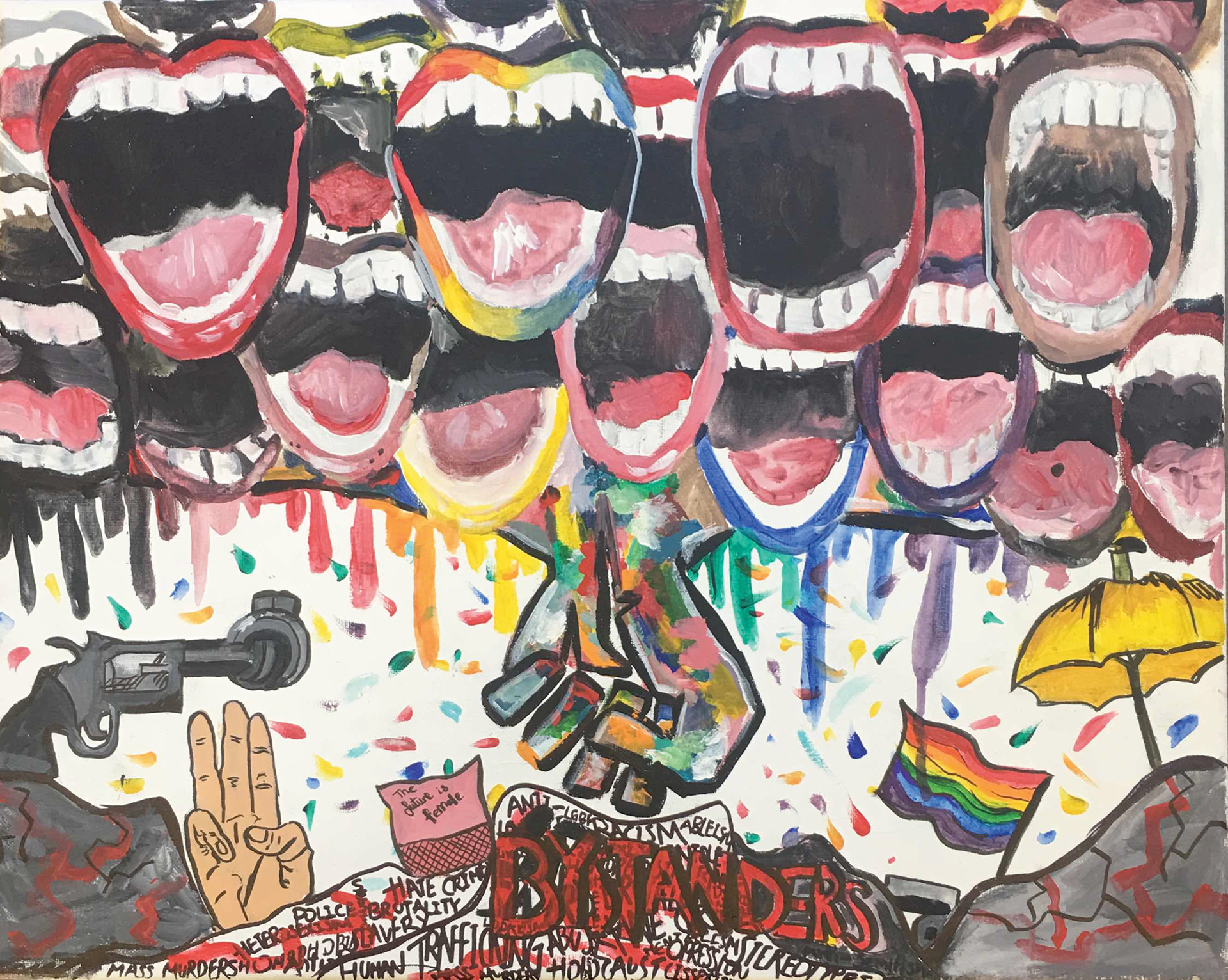 Inspired by Henri Matisse’s vibrant, contrasting colors, my piece is a mixture of contemporary art and realism, two of my favorite artistic styles. It was meant to portray the power of language as well as the courage of speaking up. The contrast between vibrant, saturated colors as well as black and red symbolize the fight between good and evil. The multiple lips in this painting symbolize speech, the act of speaking up. The lips all form one giant fist, inspired by the Black Power fist originated from the Black Panther party of 1960, meaning that with our words, we are able to do anything and that words have far more power than anyone could imagine. The hills filled with words on the bottom of the canvas lists some issues we face today, all having to do with oppression, suffering, and humiliation. For instance, human trafficking is an example of oppression against human rights. Going back to the painting, the fist is crushing the hill, and the confetti-like specks surrounding the action symbolizes a celebration of peaceful rebellions using our words. Around the hills, you may notice bizarre objects such as the umbrella. These are all symbols of great protests around the world. The umbrella is a symbol of the pro-democracy protest led by students in Hong Kong; the LGBT flag represents members and representatives of the community who has stood up for equal rights; the pots stand for anti-government marches in Argentina, where protesters often banged their pots together; the pussy hat is a symbol for the feminist movements today all around the globe; the three finger salute is commonly used in Thailand to stand for justice, equality, and brotherhood; and the knotted gun is a well-known sculpture by Carl Fredrik, one of the universal symbols of peace. I wanted to demonstrate that our words have power and as long as we use those powers in the right way, anyone can make a difference. 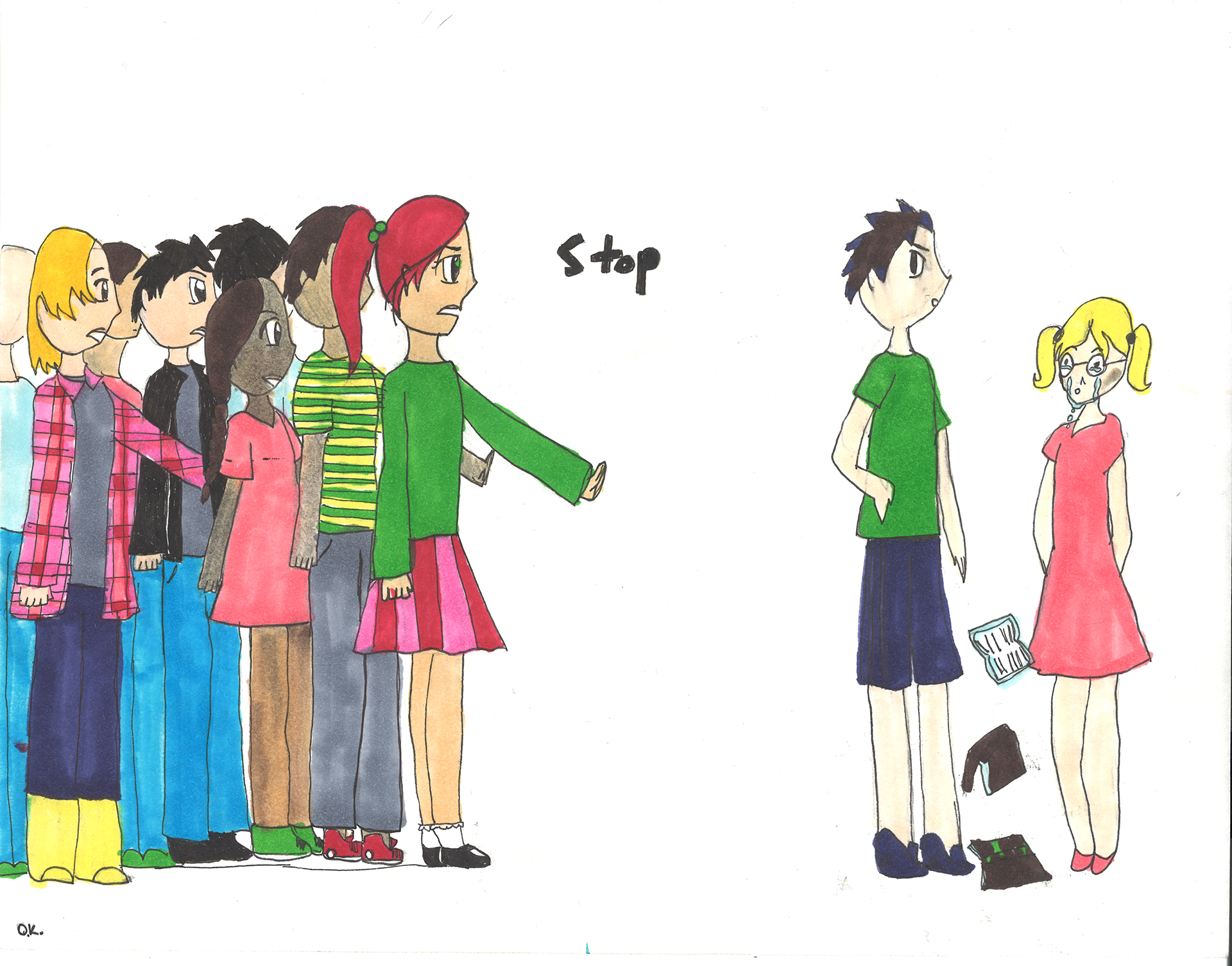 Even if you’re alone, when you do nothing it will only get worse. But if you do something, it can only get better. Don’t be a passive bystander, be a strong one.

“Alone” represents the way that bystanders are hurting other people by not acting out or speaking. As a sea of people flow past a clearly depressed person, not a single one of the thousands walking past stop to see if they are alright or need help. The United States Holocaust Memorial Museum states how even if an observer says or does nothing, they are still encouraging the behavior. This is also meant to represent how humanity will follow the same path as their peers and not do what makes them an individual. People need to break away from normality. 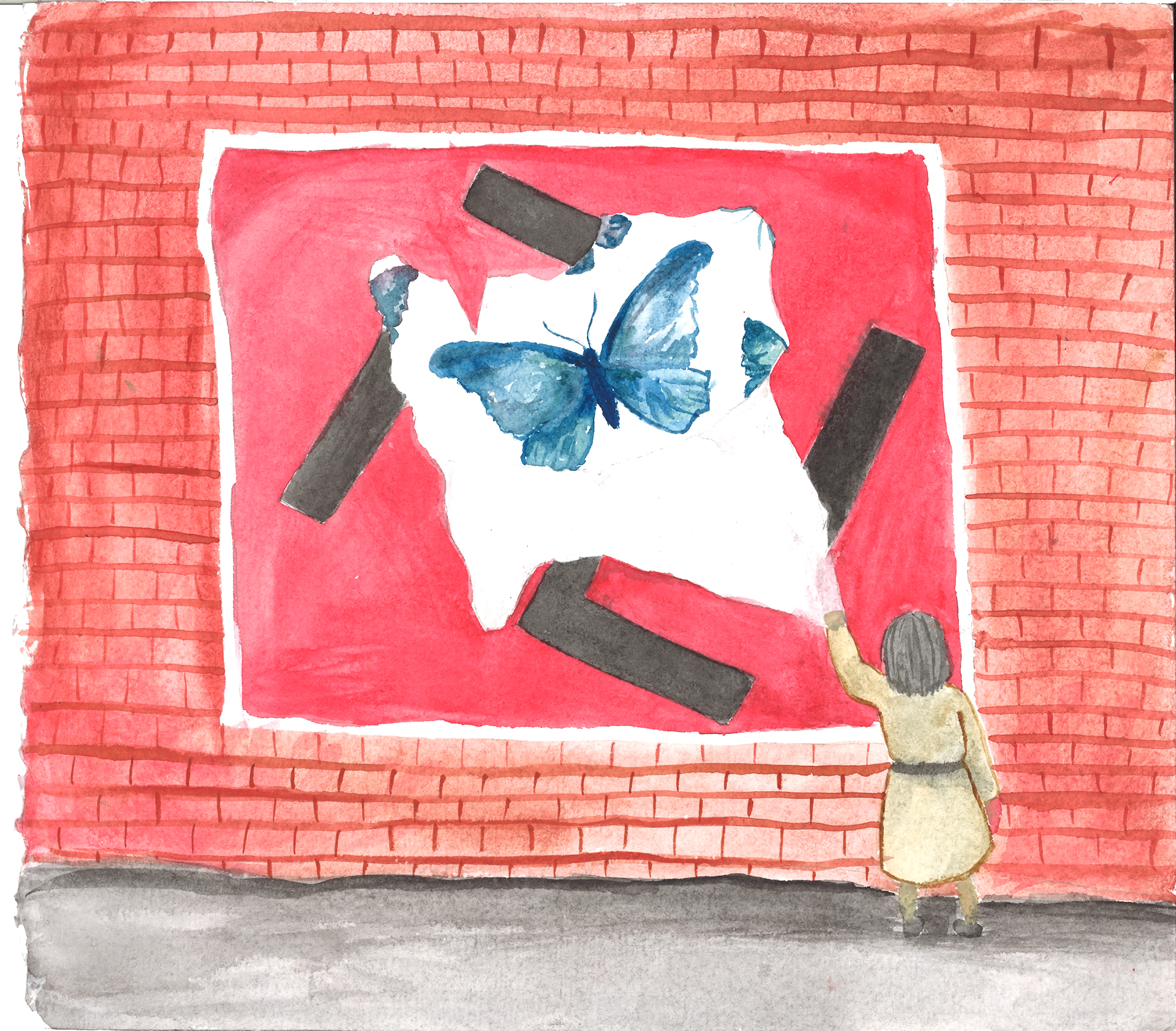 Jewish families that were pushed into the ghetto lived poorly and their voices and identities were silenced. In this watercolor drawing, it depicts a little girl who lives in the ghetto, ripping off the power with the Nazi symbol to show that she was against this hatred she was experiencing. She is choosing not to remain silent, but revealing the beauty that has always been there. Butterflies were special to the kids in the camps, representing hope. To rip off this poster, it illustrates butterflies flying around in an abyss. Kids were treated with no respect, killed and stripped of innocence. She was demanding that respect back in her own way.

In April of 2018, I was just sitting in the back of the car, drawing and listening to music in traffic. A driver had road rage and hit our car. I rolled down my window to see what happened and a driver from a different car yells at us, “You need to learn English and learn the rules. Go back to your country!”…Through my personal experience, I’ve set a personal goal. I swear “never to be silent whenever and wherever human beings endure suffering and humiliation” through words and civic engagement…. The words of the driver fuels me to use my words to speak up and to help the oppressor so no child is questioned about what language she speaks or what nationality she is… I vow never to be silent or be a bystander of bullying. We are supposed to learn from our mistakes and history. Even after the Holocaust and the Japanese incarceration, there is still work to be done and I must speak up. I need to be at the table to represent the voice of the voiceless. Read full entry.

“The Holocaust”
Read top-bottom for Jewish perspective. Read bottom-top for Nazi perspective
.…
I refuse to listen when you tell me
the vile future that awaits
because I possess the strength to overcome
no matter how much blame is placed upon me
I will fight for myself
for my family
for my people
the Holocaust
a wickedly sinister thing to contemplate
... Read full entry.

“He is not hurt thanks to a girl that stood up for him even though she didn’t know him,” the mom responded.
“Wow, wish that would happen more often,” the dad said with a sigh.
Billy thought about the girl that helped him and wished that people everywhere would stand up to “bullies” around the world so such instances of hate would never grow into anything more.
Read full entry.

“We Were There”
…
We were there
And are here today
So remember
We might have been weak
But we used our voices
Where a single word
Carried power
Words are formidable
To the oppressor
So we must not
Be named as bystanders
Fade into the background
Letting others suffer
For if the brave people of history
Kept quiet
Failed to rise up
Hope would die
Justice would be killed
And
The evil would win
We carry the ability of change
But
The world will not change
Because we want it to
We have to act
We were there
Where are you?
Read full entry.

“Hushed Words” is a representation of what happens when instigators are able to use the silence of others to their advantage. The Gestapo is enlarged in comparison to the boy, representing the difference in power each character holds. The boy, who is desperately trying to speak up against the oppression, has little power in contrast to the Gestapo, who attains more power the longer the people keep silent. Some spotlight shines onto the boy, but the light is mainly overpowered by the shadows behind him, symbolic of his words and actions that are ultimately hushed by the crowd’s willful ignorance. 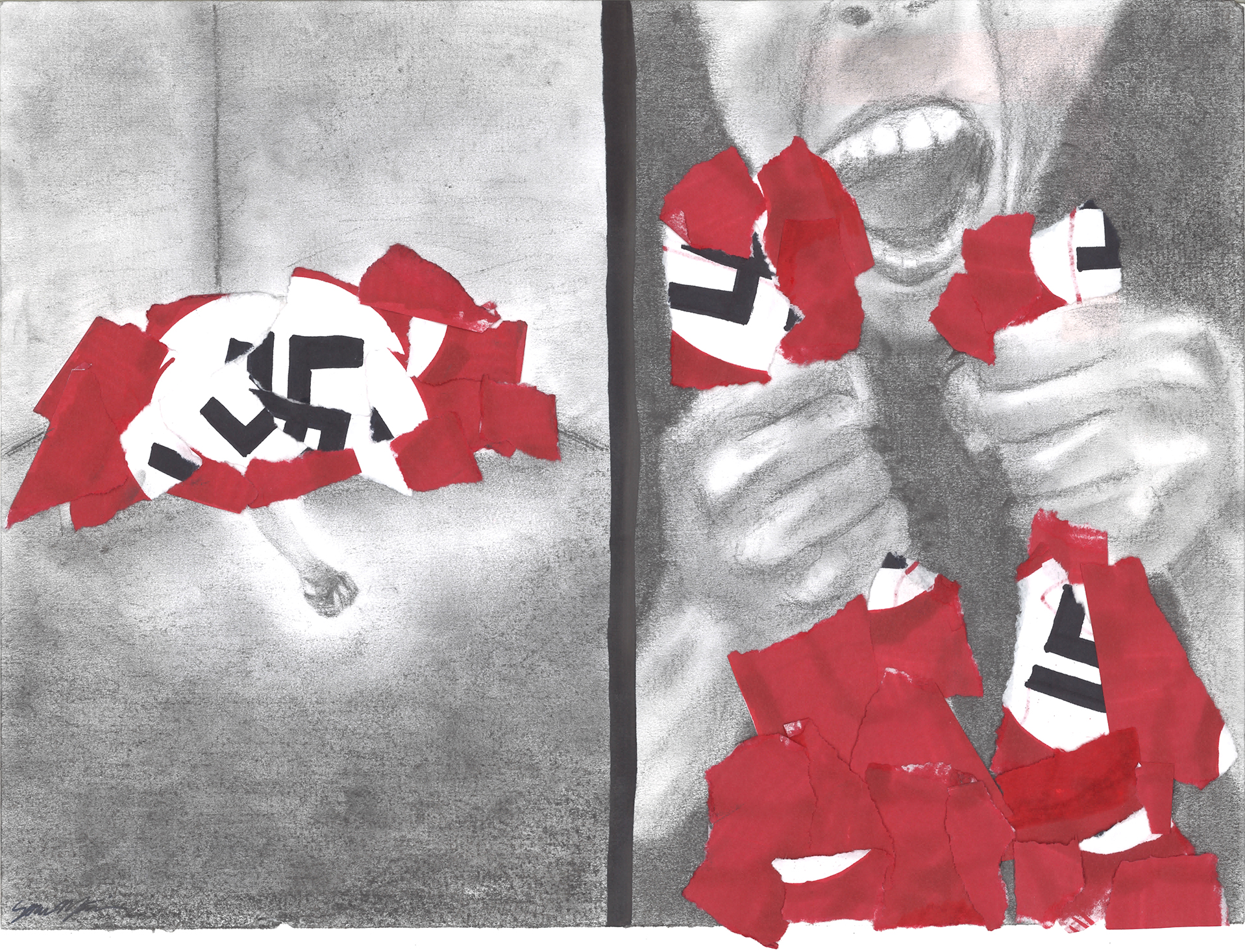 Taking sides is most important to make a difference. My piece shows two sides of before and what caused the Holocaust to end. A fragmented society, hence the rips in the flag, covers a person even though they want to reach out. This fragmented society is then ripped apart by a person who represents the whole body of the people affected. This “rip” in the flag is done by words. One’s words are what say the most about them and what they can do to change a society.

“The Oppressor.” I gained inspiration from the prompt when it stated, “I swore never to be silent.” The oppressed in this piece is not authorities and officers but a Jewish boy living during World War II. He is wearing blue and white striped clothing to symbolize the clothes of Auschwitz prisoners and the Star of David to symbolize the star the Jewish people were forced to wear during that time. He is conveying the message that people struggled to say back then, and that is that one body and one voice can impact men and women everywhere.

I created a drawing of a hand holding a human heart in its palm with the quote wrapping around it. The piece demonstrates all the silence we hold in our hearts. The suffering and humiliation takes part within the central part of my drawing which is the heart. It represents the Jewish people that were horrifically oppressed. The quote wraps around the piece as it shows all the times the bystanders of the Holocaust witnessed the horrible treatment of the Jewish community. The hand represents power. As you can rip the silence out of your heart or you can sit there and witness the suffering. The hand is to show that people have a decision, whether that is to give the tormentor power or to rise and stop the tormenting.

This photograph demonstrates the theme because we often feel silenced by those around us. However, it only takes one individual to stand up and inspire a change. In the photograph, this idea is shown through three victims staying silent and one standing up to make a difference. This change is represented through color and perspective. The gray scale color scheme shows how during the Holocaust, people felt as though their lives were blank and colorless, while the regression of size shows how the victims felt powerless and small compared to their tormentors, as though they had no way to stop them.

“Remember”
Remember.
Just because they’re bigger,
doesn’t mean they’re right.
Just because they say they’re right,
doesn’t make it so.
When everyone is following
I don’t have to go.
It’s hard to feel alone.
It’s hard to think I’m the only one who cares.
But if I don’t show I do,
who will?
If I stay silent,
who am I hurting?
If I go along and know it’s wrong,
more are hurt than just me.
Read full entry.

“The Secret Heroes of the Holocaust”
…
The reason so many lived to tell their stories
The reasons so many continued to grow
These secret heroes saved peoples’ lives
Their faith
And their hope.
They knew it was wrong
They did what they needed to
Despite their fears
Despite what others said
To put others before themselves
The secret heroes of the Holocaust.
Read full entry.

“Enslaved by Silence”
…
Silence hangs the innocent,
Silence kills and silence maims
Silence is a harder burden to bear
Than speaking out.…
We must stand together, never hesitate
To speak aloud, to protect the hurting.
Defend the helpless, don’t allow those who hate
To steal away anyone’s freedom.…
Freedom is just
One word away.
If we all join together
We can push back the choking silence.
Let us all speak for love
For though we are so small separated,
We can be more through each other.
Let us all never be silent,
For silence is death.
Let us never again
Be enslaved by silence.
Read full entry

Thank you to our panel of judges!