Live from 12:00-1:00pm (PT) on Zoom. Or watch at your convenience online. Programs are posted the following day.  Closed captioning available.

Start Learning: See All Past Episodes - You can Lunch & Learn any day of the week!

"Embracing our Humanity and Diversity" is a 5-part series sponsored by Verizon.

You can register for one or more programs using the form linked above. A Zoom link will be emailed to you for each program. 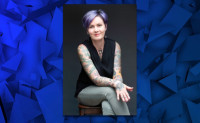 We appreciate your registration! Or just join us Tuesday at Noon (PT) on Zoom:

How can students, educators, parents, and other community stakeholders respond to white nationalist signaling in and around our schools? From anonymous graffiti to organized school board takeovers, efforts to undermine schools as welcoming democratic institutions are on the rise. In this session, we will discuss proactive steps, best practices, and specific strategies and resources to respond and strengthen our school communities against hate.

Nora Flanagan has been teaching high school English in the Chicago Public Schools for twenty-five years and currently serves on the Illinois Holocaust and Genocide Education Commission. After initially encountering emergent hate groups in her community as a teenager, Nora now researches and organizes against white nationalism as a Senior Fellow with the Western States Center, a Portland-based nonprofit working to support inclusive democracy and confront bigotry nationwide. Most recently, this work has involved speaking to educators, community groups, government agencies, and media outlets about the intersection of bigotry and youth culture. She co-authored Confronting White Nationalism in Schools, a toolkit designed to help schools thoughtfully and effectively respond to incidents of racial hostility and proactively strengthen school communities. This project has been featured in the Washington Post, The New York Times, PBS NewsHour, NPR, The Chicago Tribune, and other outlets, as well as conferences and panels across the country. 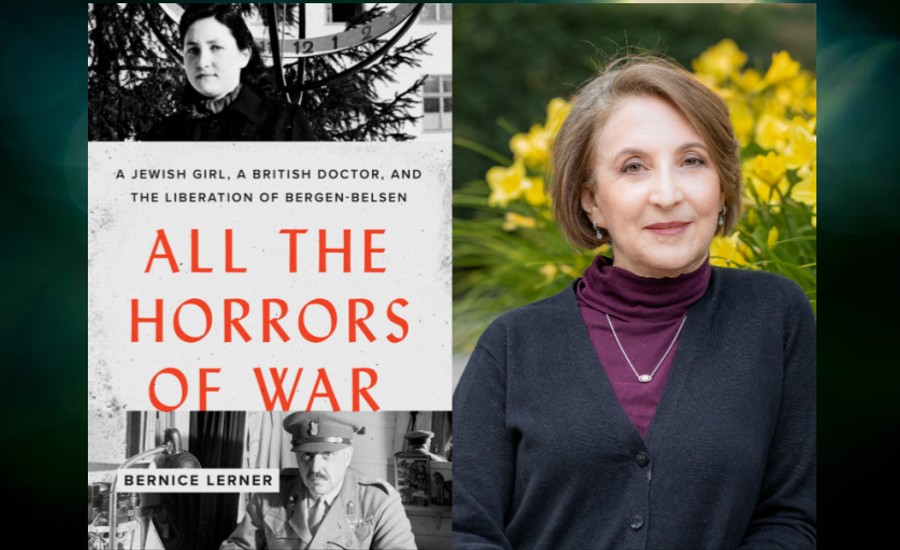 A Great Experiment in Educating Teenage Refugees: The Case of a Swedish International School

After World War II, the Swedish government took in and provided medical treatment for 7,000 sick survivors of Bergen-Belsen. In September 1945, the government issued an order for schooling to be offered to those under the age of 18, who had missed years of study on account of the war. In this presentation Dr. Lerner will show photographs of teachers and students at an “Internat” school her mother attended. She will share the complex process of recruiting distrustful adolescents, the challenges of teaching the "environmentally damaged" (many of the orphaned and homeless teens were bitter and disillusioned), and the instructors' formidable goals and "experimental" methods.

Dr. Bernice Lerner is the author of All the Horrors of War: A Jewish Girl, a British Doctor, and the Liberation of Bergen-Belsen, and other writings on the Holocaust and on virtue ethics. As director of Boston University’s Center for Character and Social Responsibility, Bernice lectured widely and taught courses on character education and on the Holocaust. Most recently, she served as Dean of Adult Learning at Hebrew College. 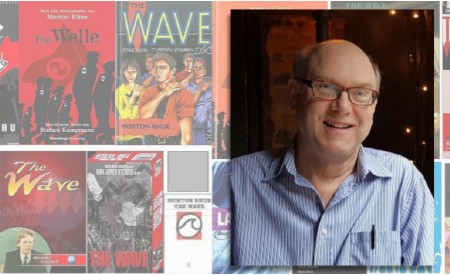 In spring 1967, in Palo Alto, California, high school history teacher Ron Jones conducted a social experiment in fascism with his class of 10th-grade 15-year-olds, meant to sample the experience of the attraction and rise of the Nazis in Germany before World War II. In a matter of days the experiment began to spin out of control, as the students and he became caught up in the excitement, confusion and chaos. This story has attracted considerable attention over the years through films, books, plays and even musicals. It serves as a teaching tool, used in schools worldwide, to facilitate discussion of the elements, appeal and dangers of extremism.

Mark Hancock was a student in the original Wave class, and is now the historian for the story. Mark is Associate Producer and appears in both award-winning documentaries about The Wave, "Lesson Plan" and "The Invisible Line." Mark is a graduate of the Yad Vashem International Seminar for Educators summer program, and has spoken in the media and at film festivals and Wave theater productions in several countries. He is currently a PhD Candidate in Holocaust and Genocide Studies at Gratz College, focusing on the rise of extremism; and holds a Master's in Nonprofit Leadership from Seattle University. Learn more at www.markhancock.com about Mark's activities. 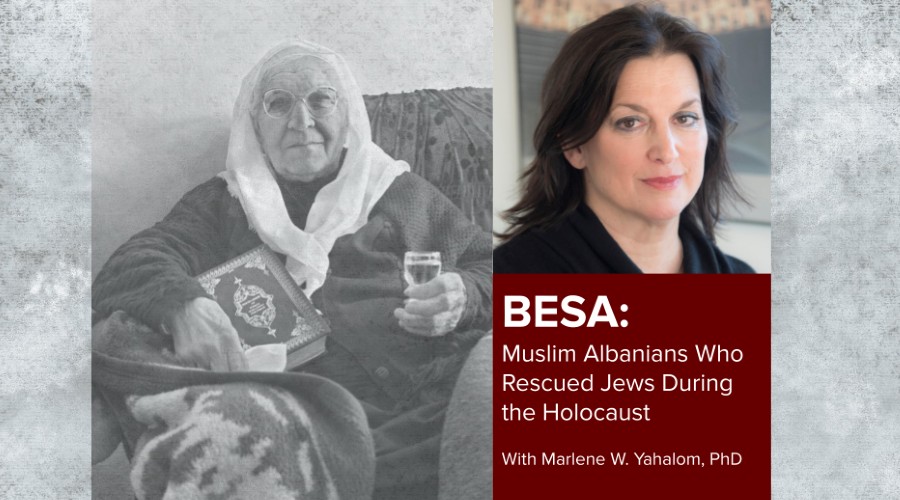 Besa: Muslim Albanians Who Rescued Jews During the Holocaust*

*This program will not be recorded.

Following the German occupation in 1943, the Albanian population, in an extraordinary act, refused to comply with the occupier’s orders to turn over lists of Jews residing within the country’s borders. The Albanians not only protected their Jewish citizens, but also provided sanctuary to Jewish refugees who had arrived in Albania, when it was still under Italian rule, and now found themselves faced with the danger of deportation to concentration camps. The remarkable assistance afforded to the Jews was grounded in Besa, a code of honor, which still today serves as the highest ethical code in the country.

This presentation coincides with the traveling exhibit, "Besa: Muslim Albanians Who Rescued Jews During the Holocaust" which will be on display at the Holocaust Center for Humanity, October 23 - December 11, 2022.  (Information about this exhibit will be posted soon!)

Marlene W. Yahalom, PhD, is the Director of Education for the American Society for Yad Vashem, in New York City.  She serves on the Education Advisory Board of the Rose and Sigmund Strochlitz Holocaust Resource Center, Jewish Federation of Eastern Connecticut, and on the Advisory Board of PRISM: an interdisciplinary journal for Holocaust educators. Dr. Yahalom is the child and grandchild of six Holocaust Survivors. 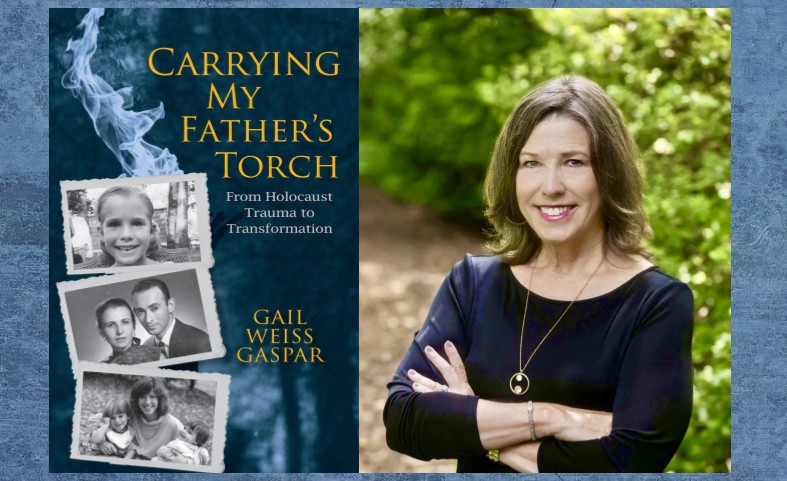 Hear from executive coach and memoir author, Gail Weiss Gaspar, about how she reckoned with family secrets and the legacy of her father's experience as a Holocaust survivor and how you can grow from trauma that may be holding you back from the life you want.

Gail Weiss Gaspar, MA, ACC, is a certified coach, an executive career strategist and the author of Carrying my Father’s Torch: From Holocaust Trauma to Transformation. She has a B.A. in Psychology from Ithaca College, an M.A. in Education/Human Resource Development from The George Washington University, and Professional Certifications from both The Coaches Training Institute (CTI) and International Coach Federation (ICF).

Thank you to our 2022 Lunch-and-Learn Sponsors:

Thank you to the grantors, companies, and individuals who have made this year's Lunch-and-Learn series possible. If you or your company are interested in sponsoring one or more Lunch-and-Learns throughout the year, please contact Ilana Cone Kennedy: This email address is being protected from spambots. You need JavaScript enabled to view it..