The Holocaust Center for Humanity is shocked and saddened by the recent murders in Atlanta that took the lives of eight people, including six Asian women. We grieve with the families and friends of the victims and the broader community.

While the motive for these murders is not yet known, they were committed at a time of increasing violent attacks on Asian American and Pacific Islanders and are rooted in racism and xenophobia.

The Holocaust Center stands in unity with the Asian and Pacific Islander communities and all people who are target ed with identity based violence. We remain dedicated to empowering individuals to learn from the past, fight for human dignity, and take action.

As a member of the Jewish Community Relations Council, we stand in solidarity.

SAN FRANCISCO and NEW YORK (June 15, 2016) — Dr. George Elbaum of San Francisco, a businessman and aerospace engineer, who writes and speaks about his experience as a child survivor of the Holocaust, was awarded an Honorary Fellowship on June 5 from the Technion-Israel Institute of Technology. The ceremony took place during the Technion Board of Governors (BOG) meeting (June 4-8, 2016) on the university campus in Haifa.
Accompanied by his wife, Mimi Jensen, Dr. Elbaum was recognized for “devotion to the Technion and Israel . . . business accomplishments that have spanned the globe and bridged countries . . . and for sharing (your) story, in order to impart the message of tolerance to present and future generations.”

A steadfast supporter of the Technion and Israel, Dr. Elbaum is an active member of the American Technion Society (ATS) National Board of Directors, the ATS North Pacific Region Board and the Technion Board of Governors.

Together with his wife, he is a Technion Guardian — an honor reserved for those who support the Technion at the highest level. The couple has supported the Technion with gifts that include the George J. Elbaum Fund for the Satell Technion-MIT Leadership Program, the Whiteman International Foundation Fellowships (named after Dr. Elbaum's mother) in the Grand Technion Energy Program, and the Formula Student Race Car project.

Dr. Elbaum was born in Warsaw, Poland in 1938. As a child, he was smuggled out of the Warsaw ghetto and lived with a series of Polish families who hid him and his Jewish identity from the Nazis. Only he and his mother survived, as they lost 10 family members to the Holocaust. In 1949, Dr. Elbaum immigrated to the U.S., and in 1955 he enrolled at MIT, where he earned four degrees — a bachelor’s and a master’s in aeronautics and astronautics, along with a second master’s and a Ph.D. in nuclear engineering.
He began his career in Los Angeles in the aerospace industry, and then moved into the international business arena. In 1972, he co-founded Intertorg, a consulting firm representing American and European corporations in the Soviet Union (including General Motors, U.S. Steel, Reebok, etc.), where he marketed their products and services. After 25 years, he switched gears again, turning to commercial real estate investment and development.

In 2010, he wrote and published Neither Yesterdays Nor Tomorrows, a book of vignettes from his childhood during the Holocaust, and started speaking to student groups across the U.S. and in Poland about survival and tolerance. In 2014, he followed his first book with a second volume, Yesterdays Revisited, about the feedback/letters he’s received from students at the 100-plus venues where he’s spoken.

The five-day BOG meeting was comprised of award ceremonies and dedications, presentations by speakers that included Middle East expert Ambassador Dennis B. Ross, and other events such as an Innovation Panel Discussion, featuring Technion graduates such as Dov Moran, inventor of the DiskOnKey (USB flash drive). Other San Francisco-area participants included Ruth Owades and Lou Lenzen.

Becoming Bielski: A Personal Story of the Bielski Partisans

The Bielski Partisans bravely achieved the largest armed rescue of Jews by Jews during the Holocaust and have grown to tens of thousands of descendants around the world. Their story inspired the Hollywood film “Defiance” starring Daniel Craig as real-life partisan commander Tuvia Bielski. Tuvia’s granddaughter, Sharon Rennert, is a documentary filmmaker who has been exploring her family history for almost two decades. She will share her discoveries about her legacy which has taken her on a worldwide journey from Brooklyn to Belarus and has helped her build a rich family archive that provides uniquely personal insights into the inspirational heroes and survivors of the Bielski Partisans.

Sharon Rennert is a television editor, independent filmmaker, swing dancer, and public speaker. She has been editing documentary and reality programs for over twenty-five years and is an active member of American Cinema Editors and the Motion Picture Editors Guild. She shares the Bielski story whenever possible to help honor the memory of her grandparents and pass this important part of Jewish history on through the generations.

Thanks to our community partners:

The History of Anti-Asian Hatred and the WWII Japanese-American 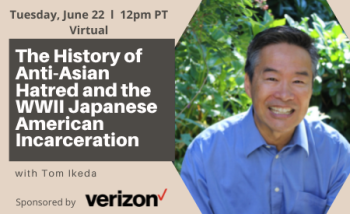 Join Tom Ikeda, executive director of Densho, an organization dedicated to preserving, educating, and sharing the story of World War II-era incarceration of Japanese Americans, who will share a brief history of anti-Asian hate in the United States. He will also discuss his own family’s personal experiences during WWII, when his parents and grandparents were incarcerated in the Minidoka, Idaho internment camp, and why this history is important to understanding and improving equity today.

Tom Ikeda is the founding Executive Director of Densho. Tom is a sansei (third-generation Japanese American) who was born and raised in Seattle. In addition to leading the organization over the last 24 years, Tom has conducted more than 250 video-recorded, oral history interviews with Japanese Americans, receiving numerous awards for his community and historical contributions.

Thank you to our community partners:

How to Use the "Master's Tools"...Or Not 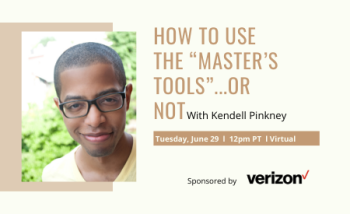 Kendell Pinkney is a Brooklyn based theatre-maker, Jewish-life consultant, and rabbinical student at the Jewish Theological Seminary. He was recently featured in Saturday Night Seder and on the Crooked Media podcast, Unholier than Thou. His collaborative works have been presented at venues such as 54 Below, Joe’s Pub, the 14th St. Y, and Two River Theatre, to name a few. In addition to his creative work, he is the rabbinic intern for the Jewish arts and culture organizations Reboot and LABA, and serves on the Spiritual Direction team at Ammud: The Jews of Color Torah Academy.

Thanks to community partners: 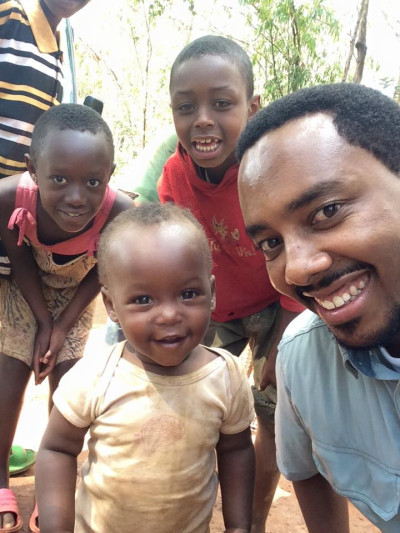 At 16, shortly after the genocide against the Tutsi, Paul went back to Rwanda as a “returnee” to the country. Many friends and family had not survived.  Paul’s next years involved attending an Englis h language high school and settling into life in Rwanda, which was not easy for him.  Nationwide, the genocide’s wounds were still raw.  Gacaca courts for restorative
justice were instituted, but many Hutu perpetrators were never apprehended.