Featured Artifacts From Our Collection

Artifacts tell a unique story - a tangible piece of history, often personal. Almost all of the artifacts that are in our collection are from local Holocaust survivors. See these objects (and many more) and read their stories at the Holocaust Center for Humanity. 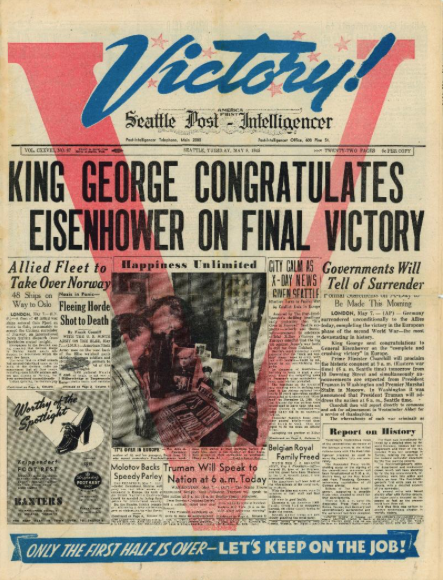 1945
74 years ago, a large red V and the headline “King George Congratulates Eisenhower on Final Victory” appeared on the front page of the Seattle Post-Intelligencer newspaper, celebrating the end of World War II.

This artifact, on display in our exhibit Finding Light in the Darkness, shows the impact of the war across the globe and gives us a window into local news at the time.
Donated by Phillip Irwin. 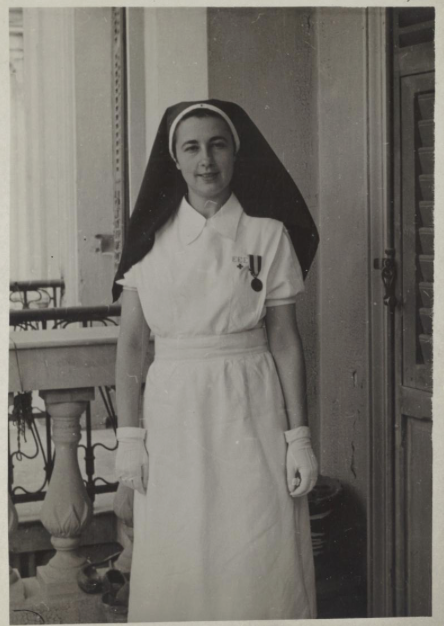 Fanny grew up in Salonica, which had a Jewish population of over 50,000. In 1943, the Germans deported more than 48,000 Jews from Salonica to Auschwitz-Birkenau, destroying this ancient and vibrant Jewish community.

Fanny and her husband Leon escaped deportation by hiding in the mountains of Greece and fighting for the resistance. Fanny later served as a volunteer nurse for the Red Cross, receiving two medals of honor after the war. Fanny and Leon emigrated to Seattle with their young daughter Irene in 1951. 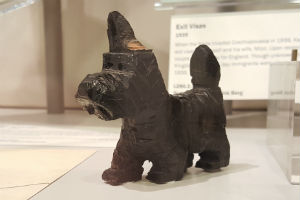 The Bloch (later Block) family escaped the encroaching Nazi influence on Czechoslovakia in 1938 and landed in New York City in December of that year. The family's beloved black schnauzer dog, Jerry, had to be left behind. Peter Block, then an infant, was given this hand-carved dog to remember Jerry. After arriving in the United States, the family got a similar schnauzer, whom they named Inky. 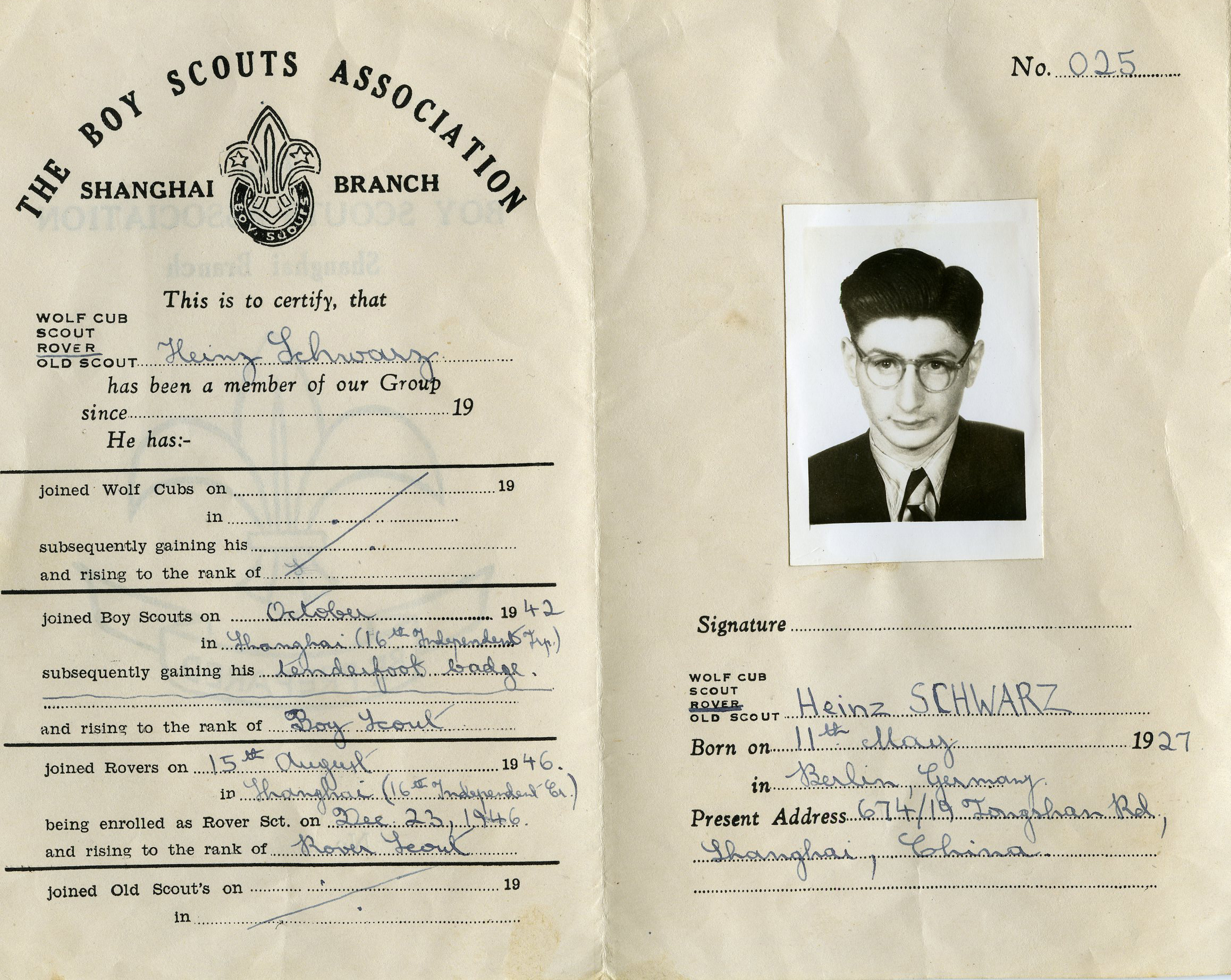 Shanghai, 1942
In 1940, the Schwarz family escaped their home near Berlin, Germany and immigrated to Shanghai, China. Heinz, age 13, joined the Shanghai chapter of the Boy Scouts. After the war, Heinz and his family settled in Seattle.
Made possible with support from 4Culture.

This letter to Fritz Köhler from the Mayor's Office of Darmstadt, Germany, reads:

"Your request to include your company as a business to distribute products under the Proclamation [Regulation] of December 9, 1933 unfortunately cannot be approved despite your position as a 'fighter on the front' [during the First World War] because according the Reich Minister of Finance's determination: non-Aryan business owners can only be included if they were severely wounded."

This letter is unique for its relatively early date. Following 1933, Jews were forbidden to conduct business in Germany, one of a number of restrictions enacted by the Nazi Government limiting the rights of Jews, leading to their loss of citizenship altogether. 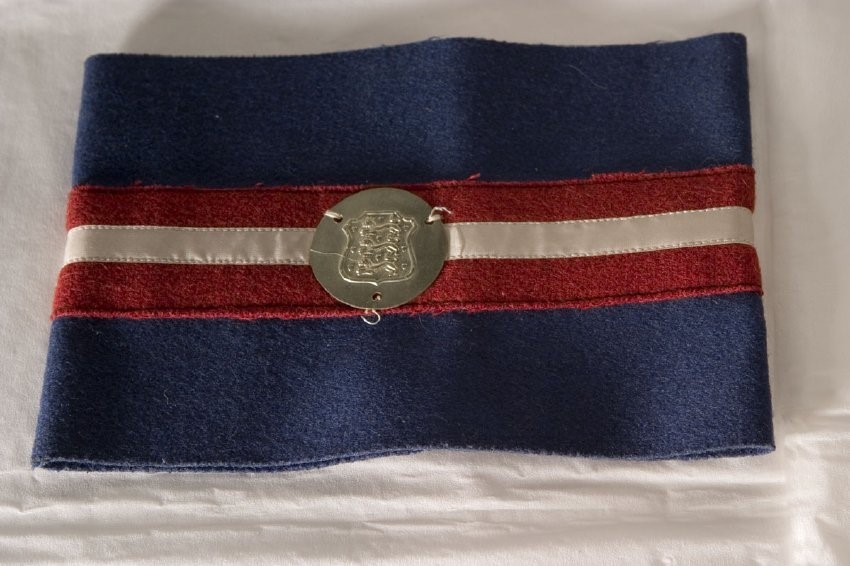 Copenhagen, 1945
On May 5, 1945, a resistance group, the Regiment Danforce, made up of Swedish and Danish citizens, entered Denmark to help liberate the country from the German occupation.  Martin Metzon, a young Danish Jew, wore this armband to show he was part of the liberating troops. Metzon had fled Denmark in 1943 for the relative safety of Sweden.  In 1953, he settled in Seattle.
Photo by Jamie Frank, made possible with support from 4Culture. 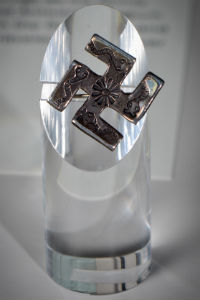 The owner of this swastika pin donated it to the Holocaust Center with a remarkable story. Following Kristallnacht, a Jewish couple handmade the pin to help feign Nazi allegiance. They managed to survive with fake IDs and in hiding. While working in Berlin for the UN after World War II, the pin's donor helped resettle the two survivors, and they bestowed the pin to her in gratitude. A close look reveals that the swastika's arms display a small piece of resistance: they hook to the left rather than the right, as was typical.
Photo by Jamie Frank, made possible with support from 4Culture. 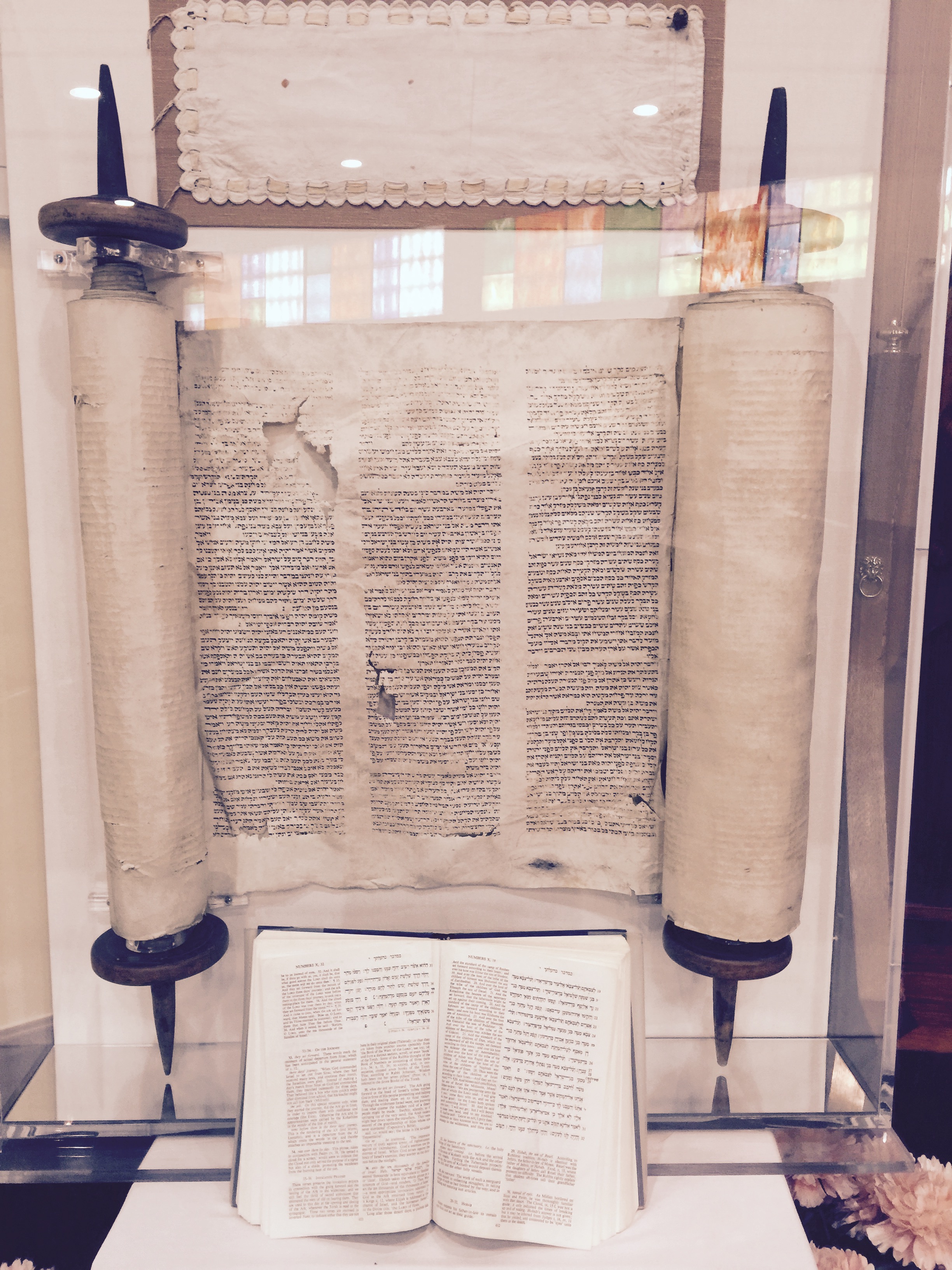 In 1942, Jewish communities throughout Nazi-occupied Czechoslovakia sent their religious objects to Prague to protect them from being lost, destroyed or stolen by the Nazis.

1,564 Torah scrolls were saved. After the war, the Torahs were left in storage, mostly abandoned until British philanthropists purchased the collection from the Czech government in 1964 and created the Czech Memorial Scrolls Trust. From London, scrolls have been loaned to communities and museums around the world. 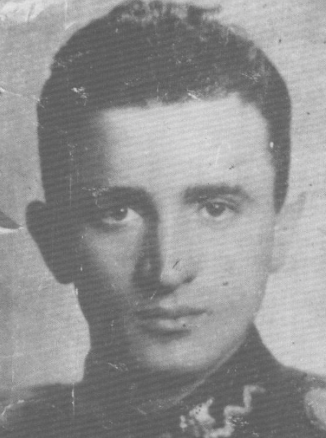 Circa 1945
In October 1943, a group of prisoners at Sobibor death camp revolted, killing SS officers and setting fire to the camp. Thomas Blatt, a Polish teenager whose family was murdered there, was part of the uprising. Over 300 prisoners escaped during the revolt, but only 54 survived the war, including Blatt. After the uprising, the Germans destroyed all traces of Sobibor.

Blatt lived in the Seattle area in the 1990s and early 2000s and was a member of the Holocaust Center Speakers Bureau. He wrote several books about his experience and shared his story with many until he passed away in 2015. 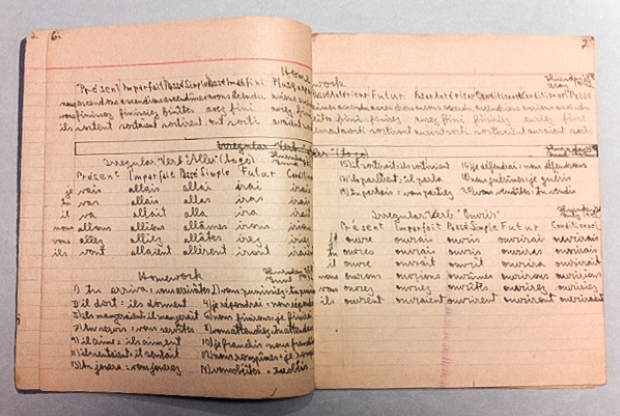 At the outbreak of World War II in 1940, the Schwarz family escaped their home near Berlin and immigrated to Shanghai, China. Heinz Schwarz, age 12, began attending a school run by the Jewish refugee community.

Since his family did not know where they would live after the war, Heinz studied English, French, Chinese, Japanese, and his native German. He also studied math, history, geography, and science, receiving high marks in all subjects. 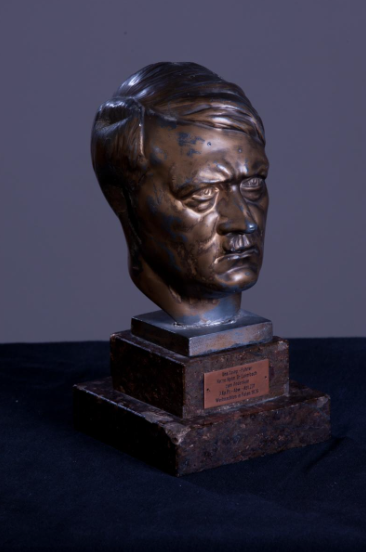 On August 2, 1934, Adolf Hitler became the president of Germany upon the death of Paul von Hindenberg. On August 19, Hitler abolished the position of President and declared himself Führer of the German Reich and People, with his dictatorial power unencumbered by any legal limitations.

The metal bust of Hitler in the Holocaust Center's collection was unearthed by donor Roger Willsie as a child in post-war Germany, where his father was part of the U.S. occupation forces. Hearing a rumor that his backyard had "treasure," Roger dug up this bust, gashing it with his shovel in the process. The former occupant of the Willsie's house was a Wehrmacht veteran who had received the bust as a Christmas gift for participating in the 1939 German invasion of Poland. 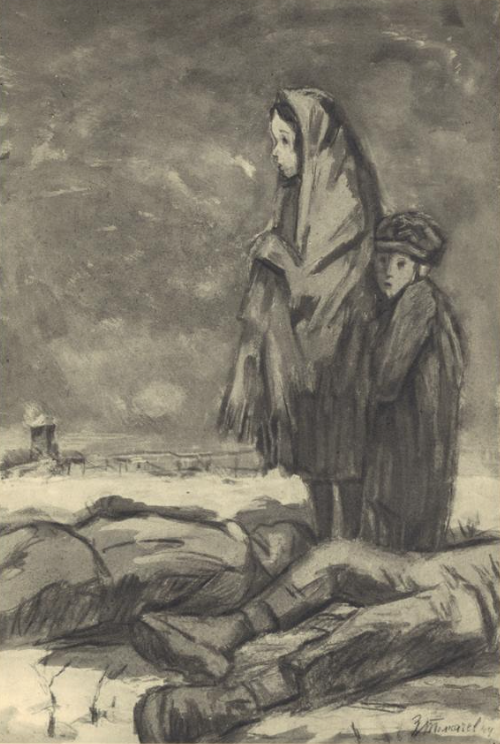 On July 23 and 24, the Soviet Army liberated Majdanek Concentration Camp. Although most prisoners had been sent on death marches to evade the Soviet's rapid westward advance, Majdanek's SS authorities were taken by surprise and failed to destroy the camp and evidence of mass murder there. Liberator Zinovii Tolkachev, a Jewish member of the Soviet Army's "documentation force," painted what he saw there and published a book of this art in 1945. It was used as evidence in Nazi war crimes trials, during which Robert Gray's father worked as a journalist. Gray donated a folio of Tolkachev's artwork to the Holocaust Center, where several pieces are currently on display. 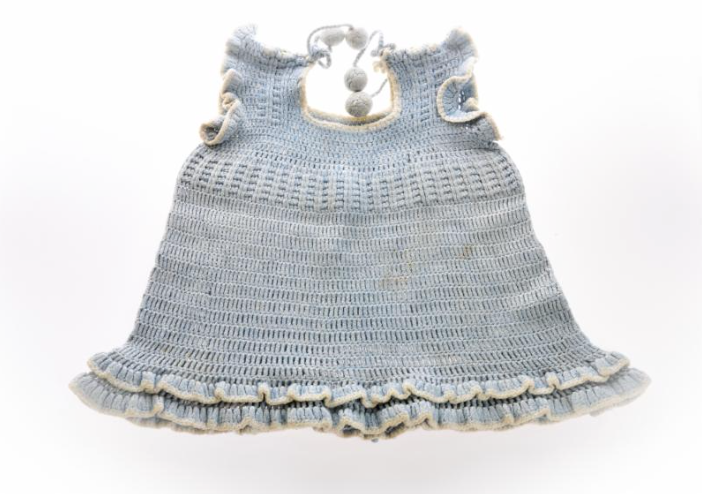 Lore (Wolf) Coe was born in Germany in January 1933, just five days before Hitler came to power. Over the next few years it because obvious to her parents that the situation for Jews in Germany would not improve. They managed to escape to the United States in 1935 when Lore was just a toddler, setting in Boise, ID with an uncle. Lore may have worn this knit blue baby dress at home in Germany, or on the journey. Today Lore lives in Bellevue and donated the dress, still in good condition, along with other artifacts to the Holocaust Center.
Photo by Jamie Frank, made possible with support from 4Culture. 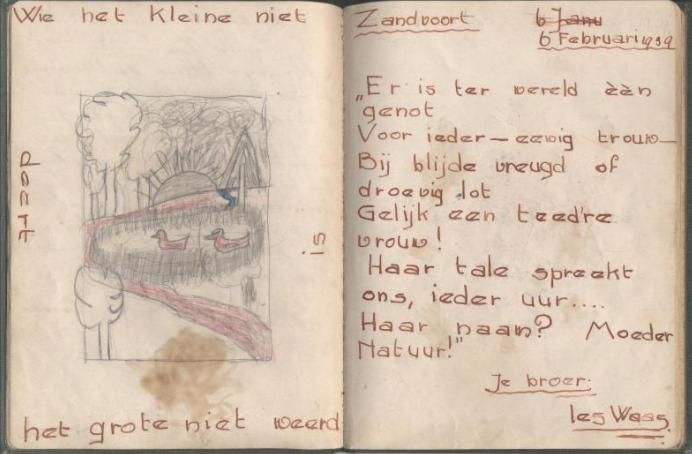 Poesie, or autograph books, such as this one belonging to survivor Hester Kool, were popular among Dutch children. Kool's friends and family wrote notes and poems, and included pictures as tokens of love and friendship.

Kool went into hiding after her family was deported from Holland. Her parents and brother were murdered in Auschwitz. This precious book is Kool's most tangible connection to her family. 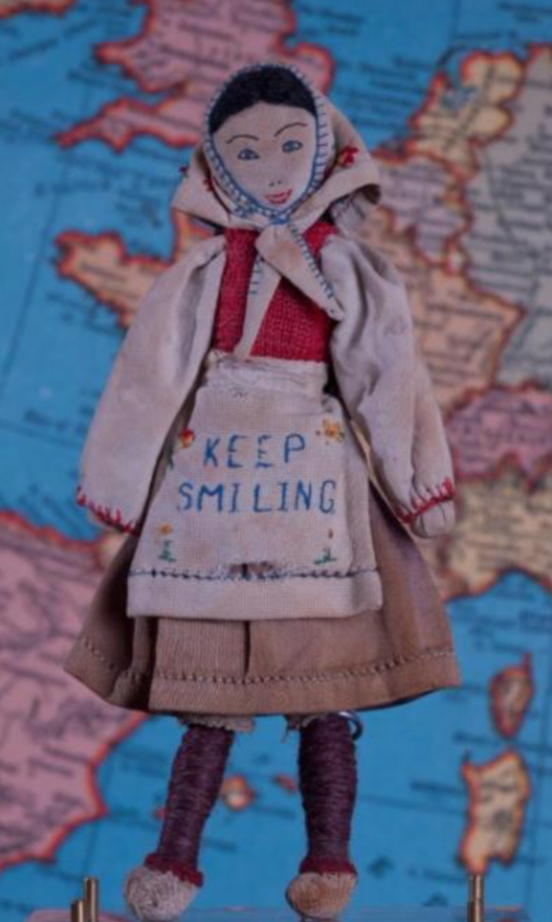 Ali Kanis and her parents hid forty Jews in Holland during the Holocaust. Ali was arrested at the age of 17 for her involvement in the Dutch underground. While in prison for five months, she made this doll using scraps of cloth, thread, and human hair.

Ali's sister, Ingrid Steppic, is a member of the Center's Speakers Bureau.
Photo by Jamie Frank, made possible with support from 4Culture. 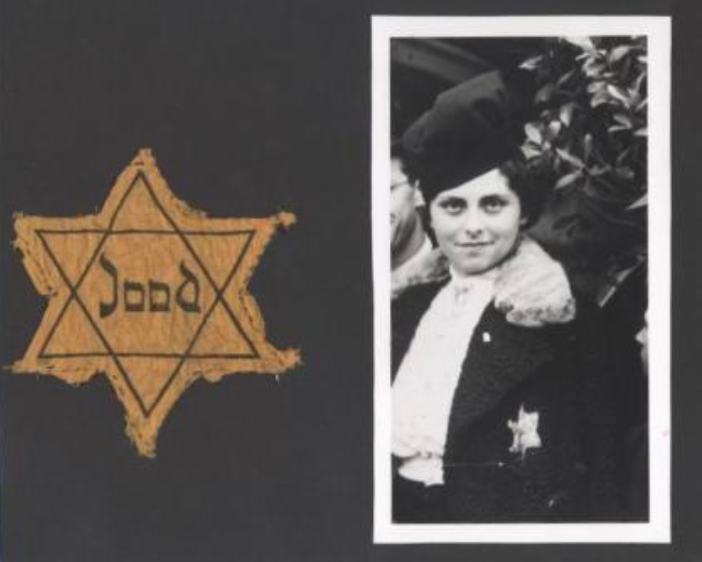 Under Nazi law, Jews were required to wear a Star of David on their outer clothing. The badge was a way to visibly identify Jews and was used to stigmatize and humiliate them.

Stars varied by country and included the word "Jew" in the local language. The stars were produced on bolts of fabric, which Jews were required to purchase, cut out, and sew on their clothing. 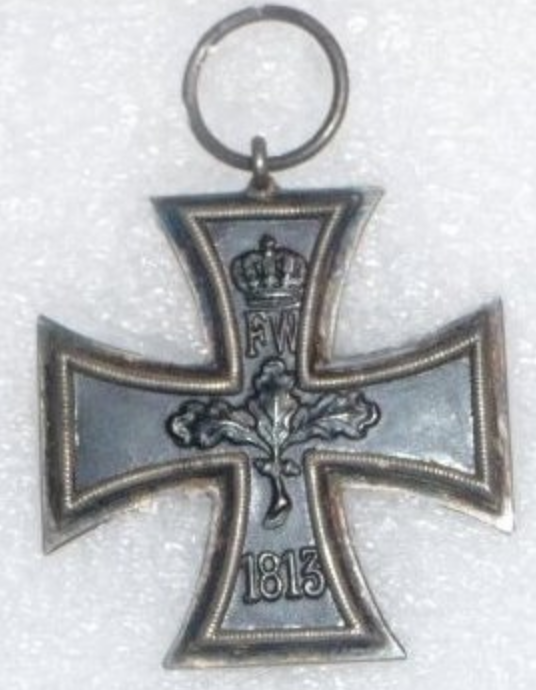 The Iron Cross is perhaps the best-known German military medal. It was instituted in 1813 by King Frederick William III to recognize acts of heroism, bravery, and leadership.

As persecution of Jews increased under the Nazis, many Jewish veterans thought they would be safe because they had been recognized for their service to Germany in World War I.

By Kristallnacht in November 1938, it was clear that their service would not exempt them from persecution under the Nuremberg Laws.

This Iron Cross was awarded to Walter Schwartz for his service in World War I. Walter and his family escaped Germany to Shanghai in 1940. 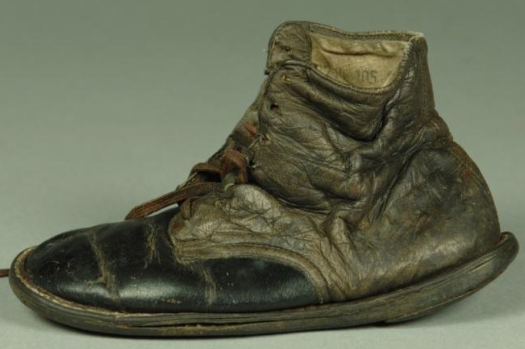 The Auschwitz concentration camp complex was the largest and most notorious of those established by the Nazis during the Holocaust. It is estimated that at least 1.3 million people were deported to the Auschwitz complex between 1940 and 1945. Of these, approximately 1.1 million were murdered.

The Center currently has 14 artifacts on loan from the Auschwitz-Birkenau Memorial and State Museum, including a suitcase; a toothbrush; and shoes from a man, woman, and child.

Auschwitz was liberated by the Soviet army on January 27, 1945, now recognized as International Holocaust Remembrance Day. 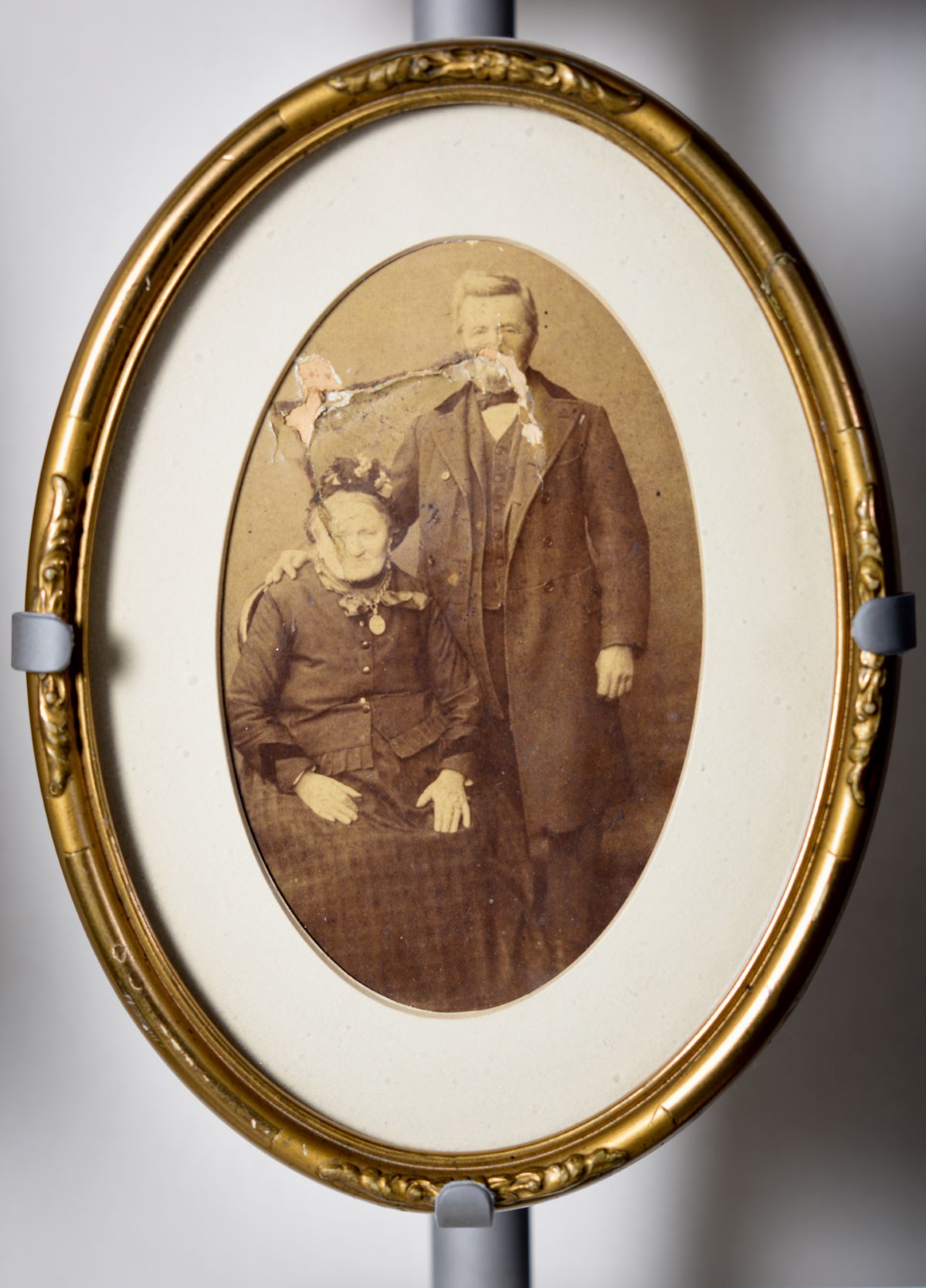 Circa 1930's
This framed photograph of Holocaust survivor Fred Roer's great-grandparents hung in their family home in Kerpen, Germany. The photograph was struck by an ax during the violent pogrom (riot) on Jewish homes and businesses, known as Kristallnacht (Night of Broken Glass), November 9-10, 1938.
Photo by Jamie Frank, made possible with support from 4Culture. 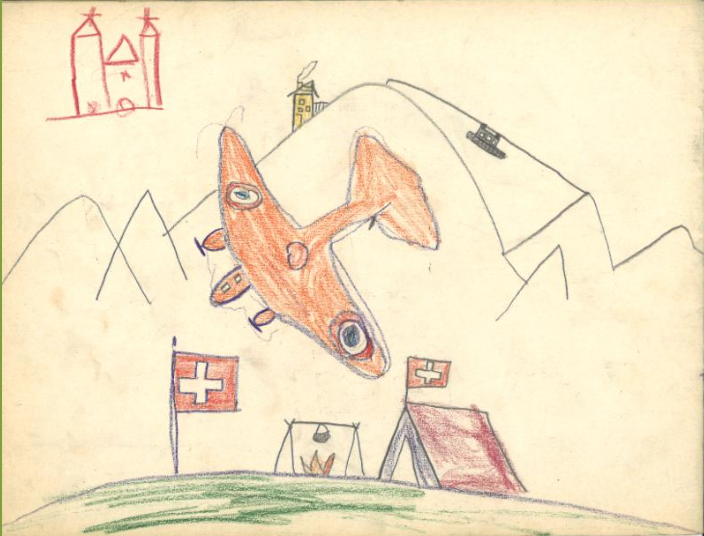 Drawing by Bob Herschkowitz of the Swiss Alps

Gstaad, 1944
Robert (Bob) Herschkowitz was only a child when his family fled from the Nazis. The family fled Antwerp, Belgium to Marseille, France, only to be arrested and imprisoned in the Rivesaltes and Gras concentration camps in 1942. They later escaped the camps and fled on foot over the Alps to Switzerland. 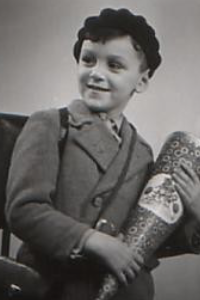 Steve Adler with a Schultuete

1936
"It was a custom in Germany for students to go to school for the first time with a large conical bag filled with fruit, nuts, and candies. This bag was called a Schultuete. It was symbolic of the parents' wish that the child would see school, and the time spent there learning, as full of sweetness and a delight." - Steve Adler