Peter was born in Amsterdam in 1935. In 1942, when Peter was only 7 years old, the Nazis seized his entire family, except for his mother Elli and him. The Dutch Underground contacted Klaus and Roefina Post on the Metzelaars’ behalf seeking a place of refuge. The Posts risked their lives to shelter Peter and his mother on their small farm in Makkinga in northern Holland. Until March of 1945, Peter and his mother remained there in hiding.

After a time the Metzelaars could no longer continue to put the Posts at risk, o they contacted the Dutch Underground once more and found two women living in The Hague willing to shelter them. After about nine months in the Hague, Ellie got wind that the women had plans to turn them in. Disguised in a nurse’s uniform she sewed herself, Ellie and Pete escaped to the road, hoping to catch a ride back to Amsterdam. In a cunning display, they flagged down a Nazi troop convoy, fooled them into thinking they were a Red Cross nurse and orphan, and hitched a ride back to Amsterdam undetected.

In 1992, Peter returned to Makkinga and visited the farm the Posts had once owned and the cave in which he and his mother had spent much time in. Klaus and Roefina Post have since been recognized by Yad Vashem (the Holocaust Museum in Israel) as Righteous Among the Nations*. Peter is now an active member of the Holocaust Center for Humanity’s Speakers Bureau.

* Since 1963, a commission, headed by an Israeli Supreme Court justice has been charged with the duty of awarding the title "Righteous among the Nations." When the data on hand clearly demonstrates that a non-Jewish person risked his (or her) life, freedom, and safety in order to rescue one or several Jews from the threat of death or deportation to death camps without exacting in advance monetary compensation, this qualifies the rescuer for serious consideration to be awarded the "Righteous Among the Nations" title.

"With My Own Eyes" Exhibit Passport - Peter 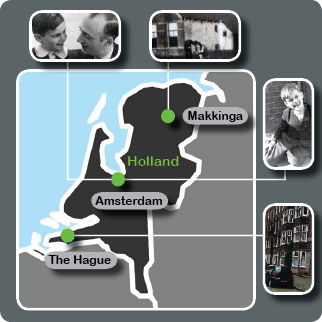