Stories Among Us: A Traveling Exhibit 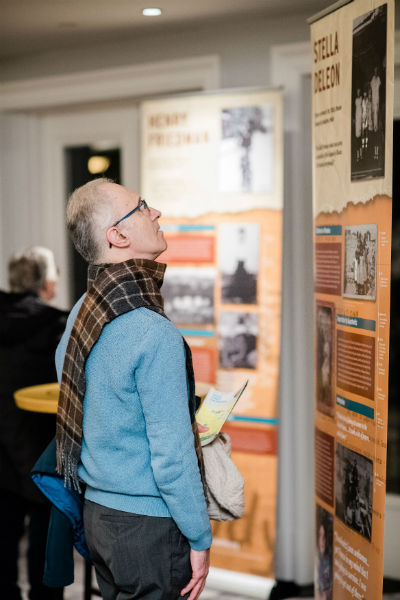 Q: What is the exhibit concept?

A: Each survivor’s story in this exhibit provides a different perspective of the Holocaust – from a refugee, to a hidden child, to a camp prisoner. Through personal stories, primary sources reproduced in this exhibit, and concise, engaging text, “Stories Among Us” is an opportunity for students of all ages to explore the connections between themselves and this important piece of history.

Q: For which audiences is the exhibition appropriate?

A: “Stories Among Us” is appropriate for grades 8 and up. The exhibit may be rented by schools and universities, community centers and groups, religious congregations, libraries, and more.

A: Ten retractable banners with attached stands and hard cases, and nine accessory shelves. Photo: Connor Ferguson
An Introductory Panel provides a definition of the Holocaust, map of Europe, and basic information about the nine survivors featured. The remaining nine banners each depict a different Holocaust survivor who made their home in Washington:

Each of the nine survivor banners has an accessory shelf that may be attached to hold take-home cards with information about that survivor, replica artifacts (separate and by request), or other handouts or collateral.

Q: What kind of venue, space, or event should host the exhibit?

A: The room for the exhibit’s display should be at least 250 square feet. The exhibit can be set up in numerous configurations – it does not need to be linear. Each banner is 3 feet wide and 8 feet tall. If you have limited space or specific needs, it is possible to borrow 1-9 banners instead of the entire exhibit. The exhibit can be rented for display at a maximum of four weeks. Rental periods can be arranged for a one-time event only or for ongoing display.

Q: How much does it cost, and what are the expectations between the Holocaust Center and renter?

A: There is a $500 deposit. Your organization will be invoiced, and deposit must be received at least two weeks prior to loan period. Half of the deposit ($250) will be refunded when exhibit has been inventoried and evaluated for damage. The exhibit cannot be shipped: renters must be able to pick it up at the Holocaust Center and drop off after rental period. The renter is expected to take good care of the exhibit, set up the banners carefully and according to the instructions provided, disseminate information to your intended audience to encourage visitation, and include the Holocaust Center’s name and logo in public relations. In turn the Holocaust Center can help with publicity, provide accompanying programming, and coordinate pick-up and drop-off of the exhibit at the Center with renter in a timely manner. A rental contract will be drawn up and signed between the Holocaust Center for Humanity and the renter outlining all terms.

This exhibit is made possible in part by generous funding from the Jewish Federation of Greater Seattle 2019 Ignition Grant. Special thanks to Chalkbox Creative and the Whitman College History Department.