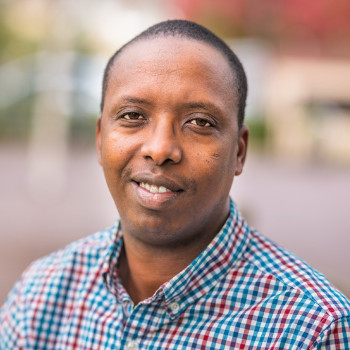 Emmanuel Turaturanye was 16 years old when genocide began in his home country, Rwanda, on April 6, 1994. Fed by propaganda, internal strife, and persecution made possible by years of European colonial rule, a militia of Rwandan Hutus murdered nearly 1 million people of the Tutsi ethnic group in 100 days – including over 100 members of Emmanuel’s extended family.  To learn more about the history leading up to, and including the genocide in Rwanda, read this article.

Emmanuel grew up in the Ngoma district of Rwanda, and lived with his five siblings, three cousins, and parents. His father was a beloved, respected minister in a church serving both Tutsi and Hutu, and his mother was responsible for their farm. Despite a loving family and a stable life, Emmanuel faced hardship and discrimination just because he was Tutsi. Tutsi were banned from attending high school; Emmanuel recalls being called “cockroach” and “snake” when he was just eight years old. On numerous occasions he was told he would be killed and that he was somehow a foreigner; an “other.”

On the second day of the genocide, a group of Hutu militia, including friends and neighbors of Emmanuel – attacked his home and killed nearly 100 family members. Emmanuel and his three-year-old sister, Amina, found temporary refuge at Ngoma’s district office. When the Hutu militia later converged around this office, murdering up to 5,000 more Tutsi, Emmanuel and Amina fled to the home of a family friend, Kamondo, whose own son was a member of the Hutu militia. Nevertheless, Kamondo vowed to hide them, risking her life and safety. Once he felt it was safer to emerge, Emmanuel joined the Rwandan Patriotic Front (RPF) in its attempt to defeat the Hutu militia and stop the genocide.

By the time the RPF prevailed and the genocide ended (July 1994), Emmanuel, like Rwanda itself, was left with immense trauma. In the ensuing years, involvement in church and therapy helped Emmanuel to heal. In 2013, he married his wife Danielle, and they moved to her home city of Portland, Oregon, in 2015. Emmanuel is passionate about equal rights and preventing hate. He continues to tell his story to share these messages with the world.