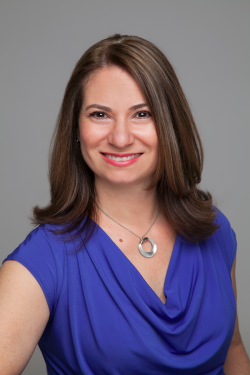 Daphna Robon tells the story of her parents, Imre Friedmann and Naomi Kraus.

Imre was born in 1921 in Budapest, Hungary. Higher education was always his goal, but by the time he was ready for college in 1939, it was almost impossible for Jews to attend university in Hungary due to antisemitic restrictions.  He finally enrolled in a university where he endured terrible discrimination from both students and professors.  In 1944, Hungary was invaded by the Nazis, and Imre, like many Jewish men, was forced into hard labor.  Luckily, he survived the labor camp and was later saved from being deported to a concentration camp by a very courageous person who impersonated a guard. After World War II, Imre escaped from Hungary to Vienna where he received his PhD in botany, zoology, and philosophy.  He later immigrated to Israel where he became a professor at Hebrew University in Jerusalem.

Naomi was born in 1933 in Budapest, Hungary.  She was hidden in Budapest during the Holocaust, first in a Swiss “safe house,” then with a family, using a false identity, thanks to courageous non-Jewish upstanders.  After the war, Naomi was united with her mother in Budapest and finished high school. She then escaped Hungary to Vienna and later immigrated to Israel.

Naomi and Imre met in Israel on a blind date and married in 1953.  Naomi, as the spouse of a faculty member, could enroll for free at Hebrew National University where she received a PhD in biochemistry. Later, the couple immigrated to the United States and became highly successful professors in their fields of science. Imre became quite well known in his field and is mentioned in Carl Sagan’s famous book Cosmos.  He was featured in National Geographic and Discover magazine, amongst others.

Daphna was born in Israel and spent most of her childhood years in Houston, Texas. She was a lawyer and worked in insurance before changing careers to become a real estate broker, which she continues till today.  Daphna lives in the Seattle area with her family and began sharing her family story as a Holocaust Center speaker in 2021.  Her presentation is filled with primary source documents and video clip testimonials of her parents.  Daphna has a strong passion for doing what she can to stop antisemitism and racism. Daphna dedicates her presentation to her Grandmother Gizi, one of her strongest supporters throughout her life, and the person who taught her what it means to be resilient.