How to be an Anti-Antisemite Course 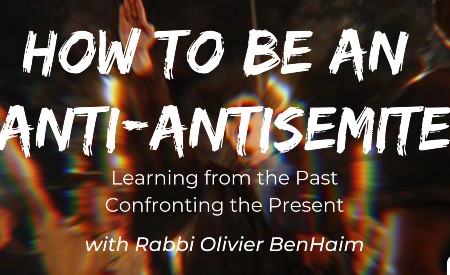 How to be an Anti-Antisemite Course

America has recently seen antisemitism flare up on its streets, against its Jewish institutions and, exponentially, online. public harassment, desecration of sacred sites & vandalism have multiplied, as have the numbers of fatal shootings. On the far-right, tiki-torches marchers shout on America’s streets: “Jews will not replace us!” On the far-left, Israel-hating activists attack Jews in NYC’s neighborhoods and LA’s restaurants.

This hatred of Jews isn’t new. It is more than 2,000 years old. And though it expresses today in different guises than in the past, the core of what animates antisemitism has remained the same. Understanding this history, tracing back the birth and evolution of the different strands of antisemitism in time, allows us to better spot it, call it out for what it is, and confront it today, something we can no longer postpone doing.

This course is for anyone, Jewish or not, invested in combating racism and prejudice wherever and however it may appear. This is a necessary course. And its time is now.