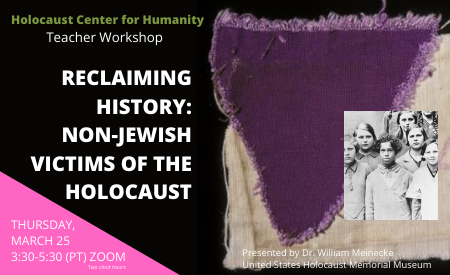 The Nazi regime persecuted different groups of people based on their antisemitic and racial ideology. Jews were the primary targets for systematic persecution, but Nazi policies also led to the brutalization and persecution of millions of others including the Roma and Sinti (Gypsies), people with mental and physical disabilities, those of African descent, Poles, gay men, and Jehovah’s Witnesses.

In this workshop, teachers will explore Nazi ideology and how and why Nazi policy singled out these groups and how the racist belief system became encoded into law.

Dr. William Frederick Meinecke Jr. joined the staff of the United States Holocaust Memorial Museum in Washington D.C. in 1992. He was on the original design team of the Museum's Wexner Center’s multi-media program on the Holocaust, the Historical Atlas of the Holocaust, and the Student Learning website. In June 2000, Dr. Meinecke joined the staff of the Museum’s Education Division. His book, Nazi Ideology and the Holocaust, was published by the Museum in December, 2007. For the last 10 years, Dr. Meinecke has shared his expertise in numerous venues in the U.S. and abroad and has specialized in Holocaust seminars working with law enforcement officers, judges, prosecutors, and attorneys on the subject of “Holocaust History and The Law.”