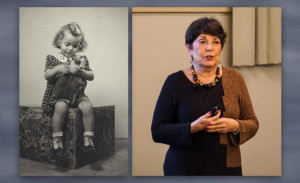 Agi Day was born in Belgrade, Yugoslavia on May 13, 1940. When the Nazis invaded that country in 1941, she and her family fled, walking 196 miles to Budapest, Hungary. Agi’s mother convinced a local priest to hide Agi, age 4, her sister, age 16, herself and her mother in the priest’s apartment. Later, her family was hidden in a convent, but Agi, too young for the convent, was sent to live with two different Catholic families who passed her off as their cousin from the countryside. Agi was not reunited with her family until after liberation, May 1, 1945. With no home to return to, Agi, her mother, and sister, resided in a Displaced Persons Camp in Bad Gastein, Austria. Agi immigrated to Toronto, Canada in 1951 and later to the Seattle area. Agi is a member of the Holocaust Center for Humanity's Speakers Bureau. 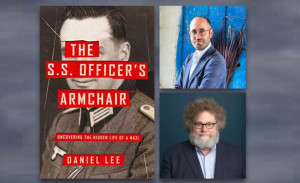 Tuesday, December 15
The S.S. Officer's Armchair: Uncovering the Hidden Life Of A Nazi with author Daniel Lee, in conversation with journalist Knute Berger

During a dinner party in Florence a few years ago, Daniel Lee was told a very strange story; a guest recounted how her mother had recently taken an armchair to an upholsterer in Amsterdam. While repairing the chair, the upholsterer found a bundle of swastika-covered documents inside the chair’s cushion. The papers belonged to Dr. Robert Griesinger, a lawyer from Stuttgart, who joined the S.S. and worked at the Reich’s Ministry of Economics and Labour in Occupied Prague during the war. An expert in the history of the Holocaust, Lee was fascinated to know what part Griesinger had played in the Third Reich and how his most precious documents ended up hidden inside a chair, hundreds of miles from Prague and Stuttgart. The SS Officer's Armchair is a detective story and a reconsideration of daily life in the Third Reich.

Daniel Lee is a senior lecturer in modern history at Queen Mary, University of London. A specialist in the history of Jews in France and North Africa during the Second World War, he completed his doctorate at the University of Oxford, and is also the author of Pétain's Jewish Children. As a BBC Radio 3 New Generation Thinker, Lee is a regular broadcaster on radio. He lives in north London.

Knute Berger's journalism has exposed much of the Northwest's local history and has been featured in numerous publications.  He is currently the editor at large for Crosscut, and has previously served as editor for Seattle Weekly and Seattle Magazine. He is the host of Mossback’s Northwest on KCTS and PBS which features dozens of short 5 minute videos uncovering facts about our local infrastructure, culture, and history.

When you purchase a copy of The SS Officer's Armchair through AmazonSmile, a percentage of your purchase will be donated to the Holocaust Center for Humanity.