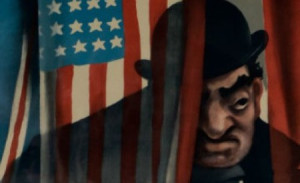 We are bombarded with theories, opinions, and a rapidly changing news cycle. While we have exposure to more media now than ever, we are faced with many of the same challenges of previous generations - how to evaluate and think critically about the news and media we are consuming.  What does it mean to be news-literate? John Silva, Director of Education at The News Literacy Project will share tips for being reliably informed. Holocaust Center for Humanity docents Marcy Bloom and Carl Shutoff will take a deep dive into a few examples of propaganda during the Holocaust that are part of the Holocaust Center for Humanity's collection.

No pre-registration needed - just click the link below and join live on JUNE 2!

JOIN LIVE ON ZOOM ON JUNE 2

Lunch-and-Learns will be offered at the same time every Tuesday. A separate link will be posted for each event.

Nazism in the Northwest is not a new phenomenon. You’ve heard of the heroic UW rowers called “the Boys in the Boat” who beat the Nazis at the Berlin Olympics. This talk will introduce you to another group Knute Berger calls the Fascists in the Forest. We will look at the pre-World War II era in Seattle and the major players in local and West Coast fascism, focusing on representatives of the Third Reich, their propaganda efforts here, and the activities of William Dudley Pelley who headquartered his 1936 presidential campaign in Washington State in his bid to become the “American Hitler.”

The talk is based on a series of stories Knute Berger wrote while researching our region’s political past for Crosscut and for his KCTS9 video series, “Mossback’s Northwest.”

The daughter of Holocaust survivor Steve Adler, Barbara shares her family's story of living in Berlin in the 1930's and eventually finding refuge in England. After her grandfather was arrested and imprisoned in Sachsenhausen in 1938, the family desperately looked for avenues to escape Germany. Only 9 years old, Barbara's father Steve was sent alone on the Kindertransport (children's transport) to England. Kindertransports were organized with British government sanction, giving refuge to approximately 10,000 mostly Jewish children from Nazi occupied countries.

May 26 | "Implications of COVID-19 for Atrocity Prevention" with Dr. James Waller
While COVID-19’s impact continues on a global scale – economically, socially, politically, and existentially – it will be particularly felt in deeply divided, fragile, conflict-prone, or at-risk societies.  In such societies, it is absolutely vital that policy measures be taken for preventive action before risk escalates to the point of mass atrocity.  This presentation will review some of those pressure points related to governance, economic conditions, and social fragmentation.  The pandemic, and its potential to serve as a trigger for mass violence, makes our shared work of atrocity prevention more urgent than ever. You can watch the program HERE.

May 19, 2020 | Michal Lotzkar, daughter of Polish Holocaust survivor Arieh Engelberg, who survived numerous labor camps before eventually finding refuge in Israel after the Holocaust, shares her family's story of survival, determination, and luck.  You can watch the program HERE.

May 12, 2020 | NAZI HUNTERS with author Neal Bascomb | In 1945, at the end of World War II, Adolf Eichmann, the head of operations for the Nazis’ Final Solution, walked into the mountains of Germany and vanished from view. Sixteen years later, an elite team of spies captured him at a bus stop in Argentina and smuggled him to Israel, resulting in one of the century’s most important trials, one that cemented the Holocaust in the public imagination. Author Neal Bascomb turns his investigative research into a captivating narrative in his award-winning books Hunting Eichmann and Nazi Hunters.  Special thanks to our partner The Queen Anne Book Company for supporting this program.  You can watch the program HERE.

May 5, 2020 | Clarice Wilsey: Letters from a Dachau Liberator | Clarice Wilsey, daughter of Army physician Captain David Wilsey, M.D. who was one of 27 doctors who entered Dachau concentration camp at liberation, shares her father's story.  You can watch the program HERE.

April 28, 2020 | Betsy Touriel-Kapner | Betsy, the daughter of Austrian Holocaust survivors, tells the stories of her parents' escape from Austria to Bolivia. You can watch Betsy's presentation HERE.

April 7, 2020 - Naomi Newman - The daughter of two survivors, Naomi tells the stories of her parents from primary source documents and historical records. You can watch Naomi Newman's presentation HERE.

March 31, 2020 - Arik Cohen, the grandson of four Holocaust survivors, shares their incredible stories of survival and luck. You can watch Arik's presentation HERE.